Although it has a few glitches, I still regard Tantra as the philosophical project most aligned with the Eleusian Epiphanies.  Here are a few notes from five decades as a practicing Tantrika:

Tantric literature usually begins with a shout-out to one's mentors and lineages, a practice that works a little like a Western CV.  Its purpose is to inspire confidence in the reader, and establish the writer's accomplishments within the context of the lineage.

That might be something of a challenge as my actual lineage lay in the future.  It will be found within the Fifth Turning of the Wheel of Dharma, the Ghantayana. 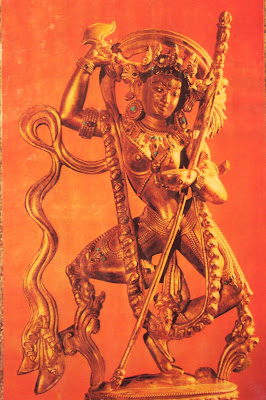 I have, however, taken empowerments [/intiations] within the second (Mahayana), third (Vajrayana) and fourth (Tantrayana) turnings of the Wheel.  My dharma name was bestowed by a Nyingma lama who didn't know me from Adam, but it happened that the name, Changchub Drolma (Enlightened Tara), referred to a practice I had secretly dedarkened a few years earlier.  So, we tight.
§§§
From 15-18 years of age, I served as a 'kamala' --a kind of cupbearer-- for a household of Western tantrikas. My legal guardian, Carla M., was in a marriage that included a third and occasionally fourth partner, and all were improvising a path using works by Alexandra David-Neel, Ajit Mookerjee, Benoytosh Bhattyacharya, Arthur Avalon and Walter Evans-Wentz, among others.  I was too young to participate in the maithuna (ritual union), but I did set up the room, prepare the robes, purify the atmosphere, arrange the mandalas, etc.  When I look back on that era, I am amazed by Carla's intuition.  Her ability to translate vague textual hints into a living practice impresses me to this day.

At age 18 I went guru-chasing, inviting three prominent teachers to my city under the auspices of one 'Austin Spiritual Council.'  The ASC was really no more than a dozen friends who put up deposits for travel expenses and auditorium rental.  In this way I was able to buttonhole people expert in meditative practice, and see if I was drawn to work with any of them.  The summer of my 19th birthday, I traveled to Dharmadhatu (at the time known as Karma Dzong) in Boulder, Colorado.  One early morning in the ashram kitchen, I found myself moving 5-gallon tins of honey with Rimpoche.  Sweet.

The massive Green Tara mounted in Trungpa's dining room haunted my dreams for the next several years, but I decided to study with the breakaway Surat Shabd-yoga teacher, Paul Twitchell.  She didn't mind.
A few years later I was in a library in Albuquerque, New Mexico, tucked into the Spanish language studies section.  Reaching for a grammar text, a large black book fell off of the shelf and hit me on the head. It was Arthur Evans-Wentz's Tibetan Book of the Dead.  It landed open to the "dissolution of earth into water"  page.  I looked around the shelf for any other titles in English -there were none- so of course I checked out the book.  Returning home, I got a phone call from a friend in Mexico letting me know that the body of one of my students, Carmen D., had just been dredged from Tantra lake in Boulder. 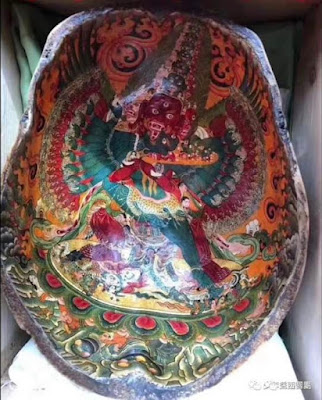 Thus I became a (reluctant) bardologist and psychopomp.  Turns out I would be especially attuned to suicides and overdoses.  Carmen was the first.

In 1993 --having entered a harrowing graduate program-- I began doing Green Tara sadhana.  I figured it would be less risky than the SSRIs flowing through my academic community.  A little riskier, perhaps, was the practice of Vajrayogini, whom I have dubbed "The Girl in the Bone Bikini."  After my daughter's death in 1998,  I took a series of empowerments -- including a Vajrasattva initiation which turned out to be an accelerant for my Bardo practice.†  Later I would discover that BuddhaVajrasattva is the consort of Vajrayogini, which made a pretty pair!

My training, as you can see, has been eclectic and ongoing - with assistance from consorts, companions, husbands, children as well as the exasperated kindness of various swamis, lamas and monks.  But the most instructive moments have come through a montage of women: ekmothers, Taras, yoginis at various stages of alchemical tranfiguration.

The Eleusian Epiphanies are built around the idea that any empowerment, initiation, diksha - whatever the terminology-- is a gift from your future Self††.  The job of a good teacher is simply to get the present and future Self/s lined up to meet one another, and jump out of the way when lightning flies through the mirror. Olé!


Notes:
† I have about 600,000 Vajrasattva mantras logged, for those who count such things.  Kinda like airmiles for Skydancers.
†† ...a phrase I minted a decade before Mcconaughey's Oscar speech!

After about a zillion true starts, the subtle body essay "On the Bright and Secret Body" is finally published on Patreon!

This is the first of a series of A/V or simply audio preliminaries I will be publishing over the next few months.  There's a short list of topics in the preface of this first piece, but here 'tis again:


~ why sadhanas (spiritual practices) have a particular structure; ~ what is close-retreat, how it works and why you might consider taking one;   ~ more discussion of the conventional and wisdom senses;   ~ a definition of the ‘hypnogogic’ or twilight state, and why it is key to the Eleusian Epiphanies. We begin with ‘the bright and secret body' because all of these require understanding how the subtle body is organized.

And... the Eleusian Epiphanies is moving to the Eastern Med in early July, so we have time for one more workshop here in the States... so please drop by the Patreon poll and sing out your preference.  FYI: the Patreon page is a bit sticky for mobile devices, you'll have more luck using a computer to register your opinion.

As everyone has gone to virtual meeting rooms, the Eleusian Epiphanies will continue in human-presence workshops, albeit with all of the safety-procedures in place.  We'll announce topic, date and place on June 16 and have the registration page ready to go for the 21st (probably).  Attendance will be limited to 10 this time, in honor of our Situation.

If anyone has a UV light air purifier they would be willing to loan, please let me know.

Which Iteration of the Matrix is this?

As the Great Sequestration of 2020 slowly oozes along, we can see how the Web has become our social fabric -- with huge deficits, mind you.  Not only does IT merely simulate our social ecologies, it makes obsolete the learning curve that defines personal interaction.  Oh well. Soon our 'connectivity' (as we oxymoronically call it) will be running our refrigerators and vacuum cleaners.  Huzzah.

I'm wondering how much of our anxiety comes from one intuition: that the simulation has rounded on its source - our sweet and irreplicable flesh.

Of course this isn't a new situation.  Every time one of our inventions (metallurgy, astronomy, god) falls into the hands of a particular kind of human, his first order of business is to pave over the bodymind.  So really nothing to see here, folks: Just another  entertainment-industrial-medical-calculatory-agency that has once again attempted to delimit the zöegraphy of incarnation.

A zöegraphy† that is prima facie, expandable to the edge of infinite. And therefore very much spookier, more open to accident/desire/whim/karma than any of us want to acknowledge.

But I digress:  Let's get back to this latest media/medical/government intrusion.  Now that we have been frightened into staying 'home' (assuming you have one), our work and play, lives and lucre are increasingly dependent on the Net.  Though advanced as if it were a 'new' idea, the fallacy that we can live through a webcam, a chat room, a video conference has been with us for a couple of decades now.   But what exactly is this 'living...'?

" [. . .] Meanwhile, the author continued to speak, invoking the need to mine a poetry from randomly-generated orders of knowledge. "Cyberspace," he said,"reduces selves, objects and processes to the same underlying ground-zero representation as binary streams, permitting us to uncover previously invisible relations simply by modifying the normal mapping from data to representation."

Did he really think that this was a set-up for creativity? she wondered.Coleridge had encountered a similar confusion, and put the matter to rest by distinguishing 'fancy' (recombination, or in the speaker's parlance,'modification') from imagination--an altogether more complicated gift.  So while the author assured them that "poetic thinking is to linear thinking as random access memory is to sequential memory," here was the blunder renewed, as if Samuel Taylor had never lifted a pen.

Now he was saying, "The mind will always overflow the body, find its limitations an impediment to the mind's range of motion."  "There it is," muttered the tibetan.  The Cartesian rabbit pacing the entire presentation shot out from the podium and bounded up the stairs.  Twitching to a stop at the tibetan's pantsleg, the rabbit sniffed his shins, then scrambled up into his lap.  He absently scratched the hare behind the ears, then leaned over and said, "I think this means you're on..."

The texan gauged the time available, her relative beauty (it would finish the point begun by her language), the patience and intelligence of the speaker. There was probably enough. Go.

"About this mind/body split you are hypothesizing," ...it was a clean blow to the forehead, the eyebrows were UP... "what do you think happens to the senses in the hyperesthesia of cyberspace?"
"What do you mean?"
"I mean if we go from 259 colors on a paper chart to 1016 colors on a monitor, what happens to our ability to distinguish color?"
"Obviously, it becomes more acute."
"And is this acuity located in the body or in the mind?"  It was a stupid question, but the author didn't seem to notice.  She watched his body weigh the answer.  "The mind," he said.

Damn. She didn't know whether to burst out laughing or begin to shriek with vexation.  Suddenly conscious of her connection to the tibetan,she packed an answer down into the next question.

"What I really want you to think about is the relationship between increased sensory acuity and desire.  What are we actually doing at the point of distinguishing one shade from another?"  He looked puzzled, so she took a breath, slowing down to pace herself to the tension in his face and shoulders, the way his glasses drew back when his ears tightened.
"When you make the transition from 259, the known universe, to the 260th," ...she watched him register the feeling of that transition... "is this just the result of accelerated experience?  Or is there a change in the extent to which desire..."  and here she unveiled the whole, slow mirror of sound, letting his image flood her voice "...comes out of Being?" Did he hear the wordplay... or better, did he feel it?

The rabbit stretched over from the tibetan's lap and nipped her finger: You are about to go too far...  She smiled, pushing the question into the speaker's flesh.   And he began to blush, his skin blooming like a parachute in the long fall toward his body.
The rabbit loped back down the stairs to the podium."

Of course it is possible to digitize the measurable, known, recombinant world that humans have taught themselves to hold in their attention.

But um,  Ekam sat vipra -- as the OGs say -- Reality is once. Whatever happens twice is reality and its simulation.  Good luck figuring out which is which.  And you need to know this because Reality is where all the art and the miracles hang out.   (Ever tried to repeat a miracle?  don't bother. . . ) 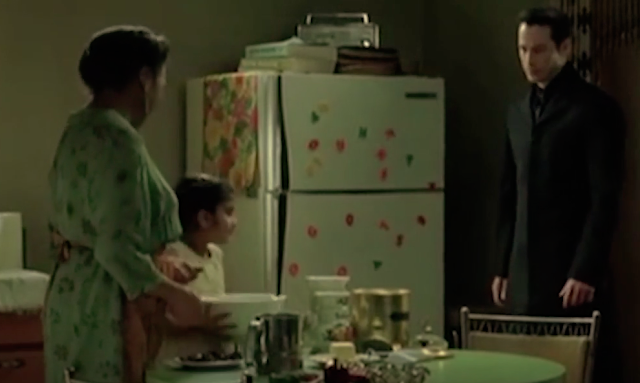